I have been following the Hamtun brand since their first Kickstarter project in 2015. I first noted them as they were the first Hampshire watch brand I came across and despite now being a Greenwich resident I am originally from the county. I have still to actually see one of their watches in the metal, I live in hope. However, Ross Davis’ watches have won the admiration of many in the watch community.

This new kickstarter launch went live today and has, as I type, already well over 400 backers for a price of £279. for the version with the PT5000 movement. This movement, for those of you not already familiar, is a copy of the popular ETA2824-2 movement made by HK Technologies in Hong Kong for a considerably lower price.

Hopefully I will one day get to handle one of these watches.

I am strangely fascinated by the young British watch brand Marloe. When they launched their first watch, the Cherwell, on Kickstarter in January 2016, I was a little sceptical. The Cherwell was another Kickstarter project with a Chinese movement. There was something in the design that did not win me over completely, so I did not expect the brand to have come on as much as they have.

The new watch, the Morar joins the range of four other watches with a variety of case designs and movements.

The watch has a 316L steel case, a unidirectional 120 click bezel and a 310m deep rating. There are three case finishes to choose from, plain steel, bronze or titanium plated. Each version is driven by a reliable Miyota 9039 automatic movement.

As you can see the refreshing aspect of these dive watches is the do not follow the generic “desk diver” aesthetic. Which will please some and dissuade other.

The watches are on sale for £449 and more information can be found at the Marloe website .I have not bought one of their watches, but I must declare a financial interest. I am now a very minor shareholder of the Marloe Watch Company so I wish them every success with this latest addition to the range.

Sorry for the blatant lift from the Pinion website but I wanted to post the availability of Pinion’s latest watch the “TT – Twin Time” as soon as possible.  Pinion have managed to produce a great looking titanium watch, a material that I am usually not too keen on for some unknown reason. 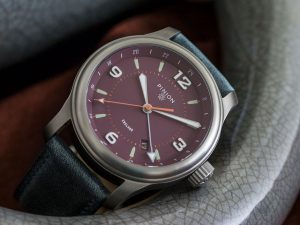 The Pinion TT (Two Time-zones) is a 42mm titanium GMT watch with dual time-zone functionality and powered by a Swiss automatic movement.

The Pinion TT is available in two dial variants: Maroon and Anthracite, with each titanium GMT watch feature a contrasting colour scheme and central seconds hand. On both models, a second time-zone is indicated by a beau-blue coloured GMT hand that can be configured to point at the 24-hour numerals on the dial.

The 42mm case is manufactured from titanium which makes the watch around 25% lighter than its steel equivalent ( Axis II Steel ) yet titanium is stronger than steel and features a distinctive grey hue colouring in a brushed/satin finish.

As with previous watches in the Pinion collection, such as the Pure and R-1969, the Pinion TT watch features applied typographic numerals that are raised above the base of the dial. Because of this, the design of the 24 hour GMT hand features a curve to allow it to pass these numerals.

At the heart of the titanium gmt watch is a Swiss made automatic movement, ETA 2893-2 that provides reliable and accurate timekeeping. The decorated movement and Pinion beau-blue winding rotor are visible through the glass exhibition case back on the reverse.

As with all Pinion watches, the TT is water resistant to 100 metres depth; it is finished, assembled and tested by experienced watchmakers in England.

I am looking forward to seeing these watches in the metal

Much of Bremont’s DNA is deeply rooted in aviation. Co-Founders Nick and Giles English, both pilots themselves, set out to make high quality watches of classic design durable enough to withstand any pressures an aviator’s timepiece may endure. 2014 saw Bremont announce a partnership with an aerospace giant, The Boeing Company. Nick English explains, “Boeing is arguably the most famous aircraft company of all time and one of the world’s most innovative engineering leaders. With its one hundred years of aerospace achievement, Boeing’s history reads like the annals of aviation.” Having seen a fantastic response to the debut Model 1 and Model 247 timepieces Bremont is delighted to be presenting further additions to the range at Baselworld 2015.

Through the partnership with Boeing, a world leader in material research, Bremont now works closely with The Advanced Material Research Centre with Boeing (AMRC) at the University of Sheffield to develop exclusive new manufacturing processes. Nick English sums up the two organisations as ‘an incredible dichotomy’. The first watches in the Bremont Boeing range, the Model 1 and Model 247, are characteristically Bremont in design but use highly durable aviation-grade materials never used before in watch manufacture. The Bremont Boeing range is an exciting collaboration between three industry front-runners using cutting edge expertise and engineering excellence to celebrate the rich history and continued leadership in innovation synonymous with the Boeing brand.

Working with Boeing’s material research expertise and AMRC’s development of advanced manufacturing processes, Bremont has set a new standard in aviation timepieces. Using inventive and more modern materials, the Bremont Boeing Model 1 and Model 247 are stunning advanced designs that act as classic tributes to an earlier era in Boeing’s rich history. The clean design of the Model 1 timepiece reflects the early simplicity of Boeing’s very first aircraft design whilst the Model 247 was inspired by Boeing’s progressive twin-engined Model 247 airliner from the 1930s. Developing these designs further has led to the introduction of the new Bremont Boeing Model 1 and Model 247 Titanium GMT timepieces, manufactured from Boeing aviation-grade Ti 6-4. This is a special titanium that is significantly stronger than commercial titanium and used widely in both airframes and engine components.

This is the first time that Bremont will be offering lightweight aviation grade titanium cases in any of its core range pieces. New GMT functionality in these Boeing models extends the current range and also responds to a demand led by the flying fraternity, an important addition for any serious pilot. Taking forward the GMT success already exhibited in select Bremont ranges, these Boeing timepieces feature a very clear GMT hand, using a tried and tested format seen on the Terra Nova. Designed for absolute clarity and legibility, white SuperLumiNova® hands stand out against a black (Model 1) or dark grey (Model 247) base dial with highly visible applied indexes also using SuperLumiNova®. The signature Boeing ‘tick’, a nod to the aerospace company’s logo, can also be found at the end of the centre seconds (Model 1) and chronograph seconds (Model 247) hands. Whilst the original Bremont Boeing watches incorporate a sapphire bezel, these GMT models feature an anthracite ceramic bezel with highlighted minute markers signalling the first time Bremont has used ceramic in any of its watches to date. The beautifully finished automatic movements in these GMT watches are protected in Bremont’s anti-shock movement mount, all finished in Boeing blue and visible through the exhibition case backs.

Nick English, Bremont Co-Founder; “It’s fantastic to be working with a company like Boeing and the response we have had from the introduction of the Bremont Boeing range of watches last year was very special. This year, having again worked hard on the technical specification with Boeing, the new GMT models were born. The beautifully simple clarity of the dial, twinned with the lighter aviation grade titanium case and the ceramic bezel, means that we have achieved everything we set out to do with these wonderful timepieces. We’ve only just begun in terms of what the two companies can do together and there will be a lot more exciting projects to come, particularly surrounding Boeing’s upcoming centenary year.”

The AMRC with Boeing was set up to identify, research and resolve advanced manufacturing, machining and material challenges. Nick English described the benefit to Bremont: “We wanted the watches to be special and unique within our range whilst adhering to our core principles like longevity, robustness and the aviation DNA that runs through our brand. When we talked to the AMRC we fell in love with what they were doing. They are about being as efficient as you can with manufacturing processes, and they’re spending a lot of time on the materials. This is a very interesting thing for us as a brand and enabled us to start experimenting on what we could do with these watches. The end result was us designing a watch and using AMRC’s expertise on the materials and the manufacturing process.”

Bremont joined the AMRC as a research member but soon took the partnership further: “We realised that AMRC are very focused on similar things to us. For example, they’re very passionate about bringing back manufacturing to the UK which is something Bremont is devoted to. We are based at Henley-on-Thames and have a facility for making parts in Silverstone. All our watches are assembled here in the UK.” To further this aim and bring back as much watch manufacturing to British shores as possible, Bremont created a role at AMRC for a PhD research student to work at the Centre and investigate watch parts and movement manufacturing processes. As Nick concludes, “The relationship has become a lot deeper than we first thought possible, which is really wonderful”.

THE HISTORY OF BOEING

Not many companies can lay claim to be launching into their second century, but aerospace giant Boeing is looking forward to celebrating its centenary in 2016. When Bill Boeing saw a piloted flying machine for the first time in 1909, it launched a curiosity for flight that would one day make him a household name. He purchased and learned to fly an aircraft in 1915 but realised he could manufacture an improved version to his own design. That first instinct – to Build Something Better –lay at the heart of every advance by the company from that time through its first 100 years.

In June 1916 Bill Boeing built his very first aircraft, the Model 1 seaplane, and decided to make aviation his business. Boeing designed, manufactured and sold seaplanes to the US Navy during World War One. The end of the conflict marked a lean spell for aircraft production so the company switched to making furniture to survive until the market became more buoyant. The 1920s saw Boeing produce seaplanes, military fighters and mail-planes, with the Boeing Airplane Company fast becoming a leading light in a rapidly developing aviation industry. By 1938 Boeing opened up world travel with legendary aircraft like the Boeing 314 Clipper flying boat, carrying Pan-Am passengers on transoceanic routes. During World War Two, European skies saw the silhouettes of thousands of Boeing B-17 Flying Fortress bombers. William Boeing passed away in 1956 but lived long enough to see the company he founded enter the jet age.