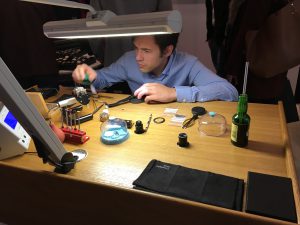 A post I realised I had not published. So this is slightly old news, over a month out of date but still worth mentioning given this great looking watch.

To release an important movement in British watchmaking – their first in-house Calibre, SH21 – was a satisfying feat in July 2014. One year on, they are beginning to capitalise on Johannes Jahnke’s innovative, Baukasten system design approach with the release of a hand-wound execution with a small-second hand display at 6 O’clock, housed in their classic C9 dress case.

The robust nature of the Calibre SH21 movement provides a stable foundation to the reliability of the C9 Small-Second and with each movement given the accolade of chronometer status by the Controle Officiel Suisse des Chronometres (COSC), precision and accuracy is guaranteed.

Each watch is hand crafted by their Swiss watchmakers at our atelier in Biel giving the wearer, therefore, a direct connection to the mechanics of Swiss engineering, encompassed in a watch with a quintessentially English design ethos.

It has taken me sometime to get around to assembling this post which is a shame given the “Britishness” of the watch in question the C8 P7350 a limited edition tribute to the Spitfire Second World War fighter. If you want one you have until the end of June to get your order in, assuming they have not all gone already.

Here is what Christoper Ward have to say about it.

They say the joy of travel is in the wandering. Facing the challenge of creating a 75 piece Limited Edition watch fit to contain a real piece of British history – a piece of original Duralumin taken from the cockpit of the last airworthy Spitfire that flew in the Battle of Britain, P7350 – we knew we had to leave no avenue unexplored in creating a process where every component piece was brought to life meticulously, by hand, and with the attention to detail deserved by such an important object.

In this watch, then, the centerpiece is not just Calibre SH21 (the in-house movement which for the 1st time is built and COSC certified in a hand-wound execution) but is actually a blunt piece of Duralumin metal only just thicker than a good old piece of writing paper, sourced for us by our good friends at TMB ArtMetal. The comparison ends there, where there is only one sheet instead of an entire block of writing paper sheets. Moreover that sheet has punched holes, signs of distress and age and is only just large enough to offer the 75 medallions needed to be cut out on condition that a) you do it smartly and b) there is not the slightest wastage.

All of the above might make you or I a little nervous; but not so – luckily – Johannes Jahnke, our man not only for construction of our already famous movement but also of the handful of JJ Calibres already enhancing a number of our watches. The trick Johannes plays is having a road map in mind of how to get the job done; something quite useful in general, even in everyday life.

So in order to prepare himself for the challenge of creating 75 perfect discs from just one precious piece of 75-year-old Duralumin, he buys a piece of metal, cuts it into a similar shape, and bangs and tortures it until it has the same rugged looks as the original. Then, he works out with the engineer at our local laser shop the individual process steps. No alley or byway is left untraveled in this labyrinthine, yet rigorously logical, journey in thought process. For example, the fixation so that the laser will cut regularly, neatly and the medallion actually will be round otherwise, you imagine correctly, it won’t fit into the caseback opening – which I assure you, is round!

In parallel, while Johannes is working away at the laser lab, all the C8’s distinctive components arrive in our Biel atelier and Brigitte, who is in charge of quality at Synergies, takes special care of all individual parts in order to assure that this very important project (to us and to you as our customer) gets the attention it deserves.

Above you will see a batch of COSC certificates and several movements. You may note a number on the plastic case in which we must deliver the movements to COSC and which is identical to the number engraved directly onto the main plate of the movement itself. Also you may have questions regarding the dial and hands on the movement. This is a working dial and working hands specially made for the COSC certification as per the conditions of COSC. Once the movements are certified and returned we will then remove these hands and dial – to use them again in a subsequent certification – and replace them with the proper components for the C8 P7350. Since with this COSC application we were having a hand-wound movement certified for the first time, there was a bit of suspense hanging in the air regarding the outcome. However, we did great as we passed well over 90% of the first batch submitted and thus – TMB here we come – we can arrive at our destination feeling confident that the quality of the movement and componentry is a fitting tribute to the importance of the historic backplate it beats beneath.