Christopher Ward appear to be really embracing the trend of making limited edition of watches by including some “historical material”.  We have seen pieces of Spitfire, pieces of Aston Martin and now pieces of an historical Jaguar. 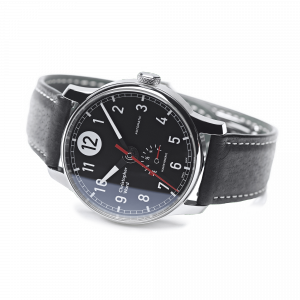 An homage to the Jaguar D-Type that won three Le Mans between 1955 and 1957, a piece from one of the 18 production D-Types has been placed inside. And to mark its most memorable Le Mans victory (in 1955, with Mike Hawthorn driving), it comes in a limited edition of just 55 pieces.
The D-Type has a special place in the hearts of British motorsport fans due both to its design and incredible track record. Our specialist partners, TMB Art Metal, have sourced pieces of the piston from one of the original racing models, which we’ve placed in the watch.

The watch is powered by ETA’s Valgranges A07.161 self-winding movement that’s been specifically built for larger watch cases.