You might have noticed that Bremont’s latest trio of watches developed together with Her Majesty’s Armed Forces, The Broadsword, Arrow and Argonaut are chronometers, certified to ISO 3159 standard, not C.O.S.C. . Which I found very refreshing.

To my mind this has been a subtle way for the Swiss to maintain the perception of the superiority of their watch industry. Several British brands using Swiss movements are highlighting this certification, which I have always thought detracts a little from their British-ness, not in a negative way only in the way that we acknowledge the Swiss as the watch “authority”.

The term “chronometer” means that a watch has been certified to have a certain accuracy per day and is tested in a few different positions at a few different temperatures. While individual corporate and national chronometry certifications differ in details, the ISO 3159 is the baseline recognized by the 163 international members of the Geneva-based International Organization for Standardization. ISO 3159:2009, the latest version, last was reviewed in 2015, and is described as follows:

The C.O.S.C. standard as you might have suspected is slightly more rigorous. Current standards for the COSC certificate entail passing the above evaluations while deviating by no more than -4/+6 seconds per 24 hours; achieving a mean variation in rates of two seconds; a maximum variation in rates not exceeding five seconds, a greatest variation (i.e. greatest individual positional deviation from the mean) in rates not exceeding 10 seconds, and thermally-induced deviation not to exceed +/-(.6) seconds. Additional conditions apply, but these are the principle guiding measures that underpin COSC certification.

Historically though there was a more rigorous standard, and it was from Britain., Kew “A” Certification. Watches tested at the Kew Observatory were given more strenuous testing and held to a higher standard than at the others as the Kew Observatory (a subsidiary of the Greenwich Observatory) was responsible for certifying marine chronometers before they were issued to the Royal Navy. While a standard Swiss chronometer test would last 15 days, the Kew test lasted 44 days. Any watch certified as an “A” chronometer from the Kew Observatory was known to be extremely accurate and robust in all positions in a wide range of temperatures.

So well done Bremont for not falling back on C.O.S.C. But, how cool would a British watch with Kew “A” certification be ? 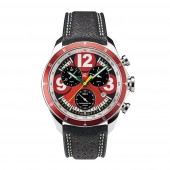 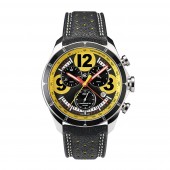 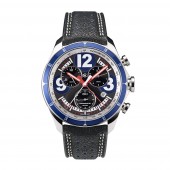 These fine watches  are a limited edition collection of four  COSC-certified chronometers, celebrates four of the earliest Grand Prix races from the pioneering years of motorsport.

This are really great looking watches for motor sport fans. I was a little disappointed to discover they have  quartz movements, I would have thought a mechanical one would have more appeal to petrol-heads.