This week I was lucky enough to be invited to Stuart Garner talk about the re-launch of Norton Motorcycles and their co-operation with Bremont watches at the Bremont boutique in London. 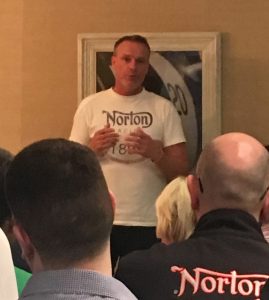 I have for sometime been sceptical about brand partnerships as some of the connections seem a little tenuous. At  a superficial level I had already accepted there might be justifiable link between these two companies, after all many watch companies are involved in motorsport.

In the quarter of an hour before the start of Stuart’s talk began I had the opportunity to chat with Simon Skinner, an actual motorcycle designer, the person responsible for the Norton V4RR. 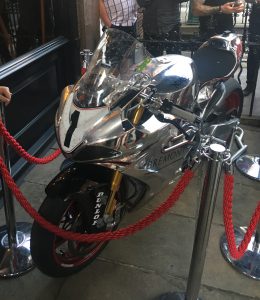 Simon, or Skinner as Stuart refers to him, is one of those people clearly doing a job he really enjoys and is very proud of what Norton have achieved in such a short time. 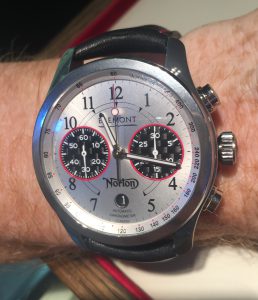 This watch is a limited edition of 200 for general sale. It combines numerals similar to the classic Norton typeface with gold chronograph borders, a gold Norton logo, and again housed in a beautifully polished Trip-Tick® three-piece case.  It uses a modified calibre 13 1⁄4’’’ BE-50AE automatic chronometer with 42-hour minimum power reserve. 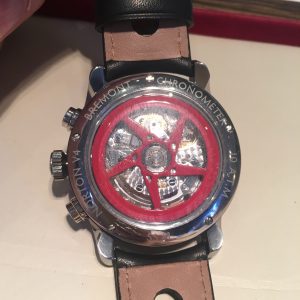 The back of the Bremont Norton V4

The display back shows off the special rotor, replicating the motorbike’s disc brake, very nicely.

The watch has a coated polished stainless steel case of Bremont Trip-Tick® construction. It is water resistant to 10 ATM, 100 metres. The racing strap isPerforated black calf-leather with red stitch and a polished stainless steel pin buckle.  This is the second watch celebrating the relationship between the two companies, the first one coming out in 2009.

So you are asking what do the two companies have in common. Well they both are making a big effort to re-build a skills base in the UK in two industries that had been pretty much wiped out. This is something that I  think most people would agree is worthwhile. Both companies are especially doing this through the development of apprentices. The Norton approach of getting their training scheme to be self funding by producing the spoked wheels struck me as being particularly interesting.

Finally came the highlight of the evening. firing up the TT bike outside the Mayfair showroom.

This is my recording of the sound, unfortunately my second best, my big finger cancelled the best one by mistake.