Last Tuesday evening I found myself at the second Bremont Adventurer’s evening, I had not been quick enough to sign-up for the first. The scope of the evening was to have a preview of Bremont’s new models before they are released.

Other than a chance to have a prolonged browse of Bremont’s Mayfair shop the most interesting part was to hear Giles English, one of the founders, talk about the company and their watches. He is a very natural speaker who manages to transmit his passion and enthusiasm for the future of British watchmaking. Apparently one of the major obstacles they face is not the ability to make the various components of a watch movement but the fact that many of these components are patented. This implies much work needs to done in designing alternatives. I look forward to following this idea up with others of the sector.

The “new” watches have all been well covered in the press recently. They were, the ALT1-C/PW  which takes advantage of Bremont’s increasing confidence in working with the case material, in this case the ALT1-C/PW is Bremont’s first non-limited edition polished steel watch that will form part of the core collection and will only be produced in limited numbers each year. As with the core collection timepieces, this polished steel case will undergo a similar hardening treatment, providing high impact resistance but still retaining its polished surface finish. The signature coating gives the watch case extreme hardness, excellent toughness, good wear and high impact fatigue resistance; it is as such used widely in the aerospace industry. 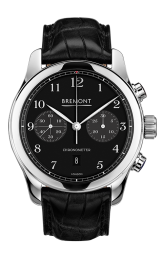 The ALT1-ZT/51 adds a new dimension to the range whilst integrating a very important design cue from Bremont’s past – The Limited Edition P51 it maintains the clean legible dial with its new applied and bespoke coloured Super-LumiNova® index markers, and with the 24hr function having been moved to the bezel for improved clarity. Greater detailing around the stepped sub dials with micro lines on the ZT models has been made to give the dial more depth. 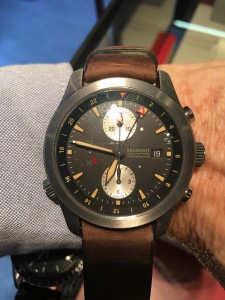 Functionally the ALT1-ZT/51 has the same features as the ALT1-ZT/BK with the integration of the Roto-Click® bi-directional inner rotating bezel. The GMT hand combined with chronograph functionality measuring seconds, minutes and hours make this model ideal for travel.

Finally there was the limited edition Boing 100 produced in recognition of Boeing’s leading position as a commercial aircraft manufacturer, carbon fibre composite from the historically significant and technologically advanced Boeing Dreamliner flying testbed aircraft, ZA004, can be found integrated into the crown of each timepiece. 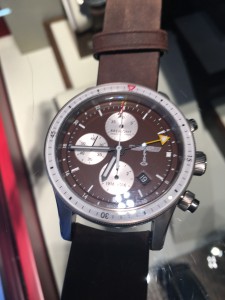 The anniversary timepiece is manufactured from Boeing aviation-grade Ti 6-4 titanium, a special metal that is significantly stronger than commercial titanium and used widely in both airframes and engine components within the aerospace industry. The distinctive brown colour of the Boeing 100 was inspired by a cockpit colour often used in the older Boeing aircraft called ‘Boeing Brown’ which was reportedly designed to make the cockpits more relaxing to be in. The hue also has that more vintage Bakelite look and feel of the older controls.

All in all it was a very enjoyable evening. I am now looking forward to the next one. For more information about Bremont’s new releases you can visit their  new releases page .