My time with the new Vertex M100 prompted me to investigate the famous “Dirty Dozen” watches a little further. Fortunately, the information is really easy to find. 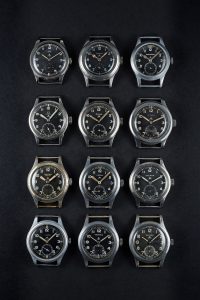 Despite none of these watches being from British brands and them being made in Switzerland I feel justified in writing about them on this blog as the watches were ordered and specified by the British government.

During the Second World War the British armed forces, like their equivalents in other nations, needed reliable watches for their service people. The British industry was converted to the production of war materials, so the War Department placed an order for custom-built wristwatches with twelve Swiss manufacturers, Buren, Cyma, Eterna, Grana, Jaeger-LeCoultre, Lemania, Longines, IWC, Omega, Record, Timor, and Vertex. These needed to be accurate, reliable  and durable, which meant they had to be regulated to chronometer standards, and also be waterproof and shockproof. More specifically the watches also had to have a black dial, arabic numerals, luminous hour and minute  hands, luminous hour markers, a railroad minute track, a shatterproof crystal, and a stainless-steel case. Powered by a  15-jewel movements. This specification was known as WWW – watch, wrist, waterproof.

The different manufacturers delivered different quantities. The rarest being Grana  with between 1,000 to 5,000 pieces whilst the numbers for Omega and Record reached 25,000 each. 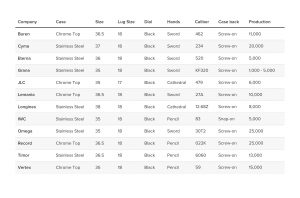 I will now be keeping my eyes open for a Grana or failing that a nice Vertex which would give me the opportunity to also buy one of the new M110s.