A couple of intriguing tweets today announced there would be the presentation of a new watch this evening by the British watch brand Bremont. Somewhat irritatingly no time was given so I had to keep checking to see if anything had been posted every half hour or so.

My checking was rewarded at about 8:00. 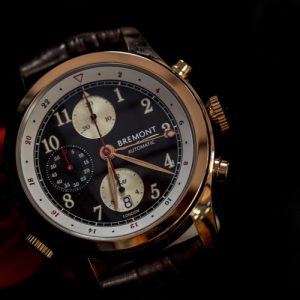 The Bremont 2016 Limited Edition celebrates the de Havilland DH-88 Comet, Grosvenor House, the aircraft that captured the world’s imagination with a phenomenal record-breaking flight in 1934 to win the incredible air-race from England to Australia.

The 282 stainless steel and 82 rose gold  watches will be produced to commemorate the historical aircraft and to raise funds for the Shuttleworth Collection. The watches feature the BE-54AE chronometer rated chronograph movement with GMT functionality.

No prices announced yet.

For me more details http://www.bremont.com/collection/dh-88/dh-88-ss