I have had a quartz Citizen dive watch since the late eighties, to its credit it has done great service as an indestructible beach watch, that is until the year before last when it started to leak after I changed the battery. As a quartz watch I realised I did not love it, but I did have a grudging respect for its reliability and durability, I now miss its infallibility.

Since taking more interest in the world of watches I have clearly kept these opinion at the back of my mind, a reluctance to accept quartz watches. However after several reflective discussions with other members of the watch community I am now coming around, these watches are accurate and reliable which is all that many people look for in their watches.

One group of users for whom these attributes are important are the military. It probably has not escaped your notice that the British military are now longer issuing Rolexes, Omegas and other brands that now fall into the “luxury” category to their personnel. In particular the Royal Navy no longer gives out the super collectable Rolex Milisubs to their divers. Sometime in the eighties they changed to different British based suppliers in particular the Cabot Watch Company and Precista, CWC from what I understand being the largest supplier, I have not yet got to the bottom of who did what in which year. As well as being from different suppliers these watches also moved toward the use of quartz movements. Both CWC and Precista (Timefactors) now offer various versions of these watches on their websites.

This vague interest inevitably leads to e-bay browsing, which lead to the inevitable purchase of a Precista PRS18-Q, thinking, incorrectly, they were no longer available. One piece of advice, if you live in the UK, buying stuff from Australia can prove to be considerably more expensive than the purchase price, as there is VAT to pay and the consequent Royal Mail handling charge. You live and learn.

Anyway, the watch eventually arrives, my particular watch is a PRS18-Q from 2013. The first impressions are very positive, the two piece rubber strap being very comfortable, though the brushed steel finish and the height making the not really a formal “office” watch. My teenage son commenting that it looked like a “toy watch”, a comment I ignored. Despite not being an office watch I made the watch my “watch for the week” as I would for one of my usual reviews and of course immediately changed the strap to a grey nato, which seemed to be the most appropriate. I then hit on the optimal strap/Precista combination, a black MN strap from Erika’s Originals or as in the picture above the green version. Though given the current political climate maybe this is not the right time to mix up equipment of the Royal and French navies.

Wearing the watch for a week I rediscovered the utility of an “indestructible” dive watch. The first advantage being the ability to wear it on my cycle commute without fear of the constant vibration of London’s uneven streets damaging the mechanism. I could also time myself using the uni-directional bezel. Then the lume ! I have never had a watch with such a bright glow.

As I mentioned earlier I have discovered my watch is from 2013, so is a slightly different specification from the current PRS18-Q that now uses the Ronda 715Li quartz movement that gives a ten year battery life which still leaves me another four years before I would have to change it.

These are the other key specifications:

So in conclusion, if you are looking for a tough reliable watch with an interesting back story this Precista is definitely worth considering, especially when you consider the current COSC version is on sale at a very reasonable £245. These are I assume these are attributes requested by the Royal Navy. On a final note I wrote to an old college friend who until recently been a Royal Navy diver to enquire about his watch experience/memories. He told me neither he or one of his ex-colleagues could remember their service watches, he had bought his own Tag Heuer… maybe watch people get a little to concerned about what is on our wrist.

I have been very slow in picking up this British watch brand. My only possible excuse is that when they launched in 2015 it was with a range of quartz watches. When I started this blog I ignored, unfairly, these companies. I have now realised that watches with quartz movements are a perfectly legitimate route to getting a brand to market. 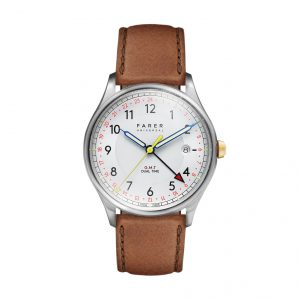 The Barnato model, above, is a great example from the quartz range, priced at a reasonable £420

THE original collection of “net-retro styled” watches is named after  British explorers, inspiring individuals who perfectly define the true spirit of Farer: daring, courageous and filled with ambition beyond the ordinary. From Amy Johnson – Britain’s most famous female aviatrix – to Everest climber, George Mallory and Tutankhamun archaeologist Howard Carter.

The 316L steel cases come in a fashionable 39.5mm size. With quick release straps on 20mm lugs.  The movements either being Ronda 512, in the GMT models, or 600D in the watches with the sub-dial.

All Farer watches are designed in London and manufactured  by  their Swiss manufacturing partners, Roventa-Henex,.

With the arrival of their Automatics at the end of last year, they have taken inspiration from the famous vessels that carried Britain’s most brilliant explorers around the globe. The first three Automatics are named Beagle, Endurance and Hopewell.

The automatics use the proven ETA 2824-2 movements and are very similar in style to the original quartz range.

Everything I have read so far about these watches is very complimentary. I am looking forward to getting a closer look.