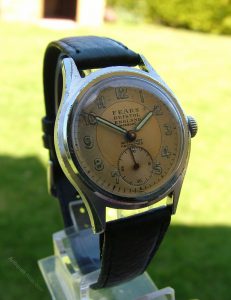 News is seeping out on social media of the re-launch of the British watch brand Fears at this autumn’s Salon QP.

Below is the only image of a past Fears watch I can find. A pretty nice looking watch. They might do worse than produce a slightly larger re-interpretation of this.

The only other news I have managed to uncover is the company’s entry on the business social network Linkedin. They say….

“The launch of the Fears Watch Company Limited marks the re-birth of a family-run British watch company. Between 1846 and the 1950s, quality watches coming out of the city of Bristol proudly bore the name FEARS on the dial. Over the past 60 years the company has lain dormant, skipping two generations to be re-founded by the great-great-great-grandson of the founder. Fears will produce and sell high quality wrist watches, manufactured in Switzerland, with comprehensive after-sales care, at an affordable price. A quality wrist watch designed to last a lifetime.”

Definitely something to look forward to at Salon QP. I am wondering how much space there is in this “British/Swiss” niche.