This watch will use some very rare NOS1945 VALJOUX 22 powered chronograph movements. There will be a restricted number available soon. Watch this space 🙂

GasgasBones is a small company started by Chris Evans.

Chris served nearly 25 Years in the Royal Air Force as a Survival Equipment Fitter. As a Survival Equipment Fitter he was responsible for the service, repair and rectification of man carrying parachutes, harnesses, Brake parachutes, Night vision equipment, helmet mounted sights, some ejection seat components, lifrafts and Apache flying clothing and lots more ! He did tours in The Falklands, Kuwait, Oman, Jordan and Afghanistan along with a ton of shorter detachments in other counties along the way.

As GasGasBones he has been making bespoke nylon watch straps for over seven years. The first velcro strap not long after getting his first Omega Speedmaster Pro. Since then he has built up a great range of straps that are pretty much unique. They suit many tool watches and have been used on anything and everything in the past years!

From the introduction of the Bremont MB range of watches and for around 3 years after, Chris produced the nylon straps issued as the secondary strap included with the MB watch. Due to family commitments in late 2011 he unfortunately had to cease in manufacturing the standard MB straps. However, in 2013 he was pleased to resume manufacture of this standard strap for BREMONT along with the red stitch Martin Baker strap. The MB1 watch and strap is only ever available to to ejectees that have used the Martin Baker ejection seats to escape their crippled aircraft. He is am also very pleased to say that he designed and manufactured the strap used by Bremont ambassador Gary Connery who became the first man to leap 2400 feet and land safely without using a parachute !!

In late 2013 GasGasBones released my first watch, the 6B MK1 which is a military inspired mechanical chronograph. A limited edition of just 20 it sold out within three months. The success of the MK1 has gave the confidence to release a second 6B watch, the MK2 which is available now. 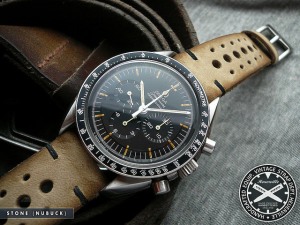 These straps look really cool and are reasonably priced at £79 . The downside would appear to be the waiting time, 14 weeks. Order now for Christmas 🙁