Here is another opportunity to understand the views of the current “British watchmaker”.

WATCH LIFE – An exclusive interview with Roger Smith from WATCH XCHANGE on Vimeo.

Roger Smith is an independent British watchmaker, formerly apprenticed to the late George Daniels. His relationship with Mr Daniels is the subject of an upcoming documentary, “The Watchmaker’s Apprentice”. In our exclusive interview, he explains how he came to live on the Isle of Man and how this has shaped his work. Roger discusses his relationship with his own apprentices, his views on independent watchmaking and his hopes for the future of British horology.

Roger was kind enough to share his insight into some of his fantastic designs; such as the Series 2, the smallest production wristwatch in the world, The GREAT Britain Watch and his latest piece, the Series 4. We asked him about his thought process, how he tackles new challenges and why he won’t be increasing production anytime soon (approximately ten watches a year). Finally, he showed us what kind of watches he himself collects.

The GREAT Britain watch, hand-made by Roger Smith, featuring a Union Jack on the dial

The GREAT Britain watch, hand-made by Roger Smith, featuring a Union Jack on the dial 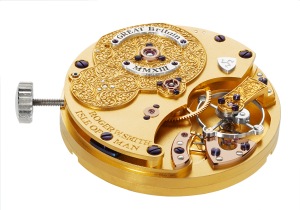 It was a privilege visiting his workshop and we hope you enjoy listening to him as much as we did!
Many thanks to Roger, his wife and all his colleagues for their generosity and hospitality.