As I wrote earlier in the week the latest hand wound watch from Marloe, the Haskell, was announced on Thursday and it looks a very impressive effort.

The big difference for Marloe is this watch uses a Swiss movement; the  2804-2 manual winding mechanical movement . It is a small movement at around ∅25.6mm and 3.35mm thick when fully wound will run for over 40 hours. Despite this small size the 2804-2 still beats at 28,800 bph.

Marloe tell us the Haskell was designed with the modern day adventurer in mind, whether an urban wanderer, working through the bustling city commute, or a world traveller trekking through new environments; the Haskell is designed to be with you every step of the way.

The Haskell is currently available in four colours all costing £995.

Bamford, the well known London based customisers of high end watches has for some time provided a “service watch” for their clients for use whilst their own watch is being worked on.

In two weeks they will make these watches available for sale.

The Bamford Mayfair range of watches are available in a number of combinations. From a choice in dial colour, bezel, coating and type of strap, you can choose a Bamford Mayfair to match your own taste.

The 40mm case will be made of military grade titanium. The movement will be a trusty Miyota calibre 2035.

For £425 you can look like you are having your Rolex customised.

I received an e-mail that I thought letting you all know about. Marloe will announce their fourth watch this Thursday (October 26th) at 3pm (BST).

This watch will be limited to 500 pieces. For the first time from  Marloe the watch will use a Swiss movement. The brand from Oxfordshire has used Chinese movements in their first two watches, the Cherwell and Lomond. They followed these using a Japanese Miyota movement in the Derwent.

This is all the news at the moment.

The highlight  of this time of year for British watch enthusiasts for several years has is the Salon QP watch exhibition in the Saatchi Gallery. 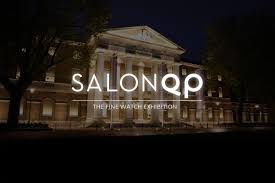 Despite there being less brands showing this year I am still looking forward to some announcements from British brands.

Nicholas Bowman-Scargill of Fears watches has told me they will be announcing three new watches. Since their launch at last year’s Salon QP, Fears have so far added a grey variant to their existing bue and white faced Redcliffe watch. Nicholas assures me the new launches will be more than just an additional colour.

Then following alphabetical order we come to Garrick who will be announcing two new  watches firstly an addition to the Portsmouth family. This will feature a guilloché dial, offered in two variants, grey (pictured below) or silver.

Then, Garrick will unveil a totally new timepiece, the S1. This watch is built by master watchmaker, Craig Baird, and finished entirely by hand. This is Garrick’s most complicated timepiece to date, featuring a skeletonised dial and incorporating a power reserve indicator. Only five S1 timepieces will be made per annum, conferring a high degree of exclusivity.

Moving along the alphabet, after being absent from last year’s show Schofield from Sussex will be back. I am really looking forward to finally seeing the Daymark watch in the metal. We should also get a chance to see the new version of the Bronze Beater, that will be available in raw un-treated metal or chemically aged.

From the images I have seen, I assume I am going to prefer the “raw” version. As well as watches we will get to see the new quirky range of straps from the joint endeavour with Simon Cudd – Schofield + Cudd.

Then no longer the alphabet we come to Pinion. I am covering them last as they will not be exhibiting at the Salon. They will however be showing their new Atom model (below) at the Watchmaker’s Club event held on the Wednesday before.

So I for one am still looking forward to Salon QP running from November 2nd to 4th at the Saatchi Gallery, King’s Rd, London

You might remember in the past I have commented on Bremont’s heritage building. This is clearly done to increase the perceived value of their watches once they come to market.

After writing my last update on the launch of the 1918 limited editions I came across this video on Youtube. This American gentleman seems to have missed the point somewhere. He goes on about how outrageously expensive these watches are. In a way that suggests Bremont might be stealing food from orphans. Surely a company has a right to offer for sale a product of this nature at whatever price the think appropriate. It is for the market to decide if they are right or not.

If we see lots of these watches discounted in  a year or so we will know he was right.

On October 4th, Bremont held a lavish event at the Imperial War museum to launch the 1918 limited edition three watch range commemorating the founding of the Royal Air Force one hundred years ago.

As we have now come to expect from Bremont they have a great video explaining the association with the Royal Air Force.

A percentage of proceeds from the sale of the 1918 will go to the Royal Air Forces Association (RAFA), which has supported current and former RAF personnel for almost 90 years.

Just in case you missed this news, which I guess is unlikely, I wanted to mark this important landmark in history of British watchmaking.

George Daniels’ Space Travellers was recently sold at auction for £3.2m. a new record for a British watch.

The BBC reported  Sotheby’s Head of  International Watch Division, Daryn Schnipper said: “The Space Travellers’ watch is no doubt one of Daniels’ finest timepieces and one can only be mesmerised by the beauty of its dial and the complexity and wonder of its movement.”