This is not a purely “`British watch brand” question, but it is one I have thought about and discussed a fare deal of late. Is there a move back towards smaller watch sizes ? Personally I have never been a fan of 45mm plus cases and feel some where between 36 ( for example older model Rolex Explorer) and 40mm is the perfect size. The newly relaunched British brand came to market with a great 38 mm range.

Here is a piece from Monochrome Watches discussing the relative merits of a smaller Omega Planet Ocean.

An interview with Giles English, one of the co-founders of British watch brand Bremont, was mentioned in twitter today. for any of you that didn’t see it here’s it is https://thestand.investec.co.uk/life-less-ordinary-giles-english/

The final two watches can be bought in either ‘E’ (Exhibition case back) or ’S’ (Steel case back) formats.

If you want one of these last two models, then simply select the model you wish to buy and pay a deposit to reserve the item; Pinion will then hold these watches for you until you wish to complete the purchase.

The watches will be available for delivery from the end of August onwards.

Intriguing because I cannot find any other mentions of this watch anywhere else.

This is one of my favourite Bremont limited editions so far. The subtle wording “Bermuda” on the watch face then the nicely engraved caseback all makes for a descreet “limited edition”

I would be curious to know how many will be made and for who?

Up-date: I have read this is the ladies size AC-32. so even more interesting, a limited edition watch in a women’s size.

Update : Mike Pearson tweeted another picture this time of a companion limited edition men’s watch for Bermuda based on the AC1. 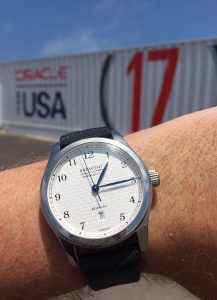 This slightly ruins the thread of my previous post. Having said that this is another handsome looking piece. I am however loosing track of the number of limited editions Bremont are producing.

British watch brand are starting their social media hints in anticipation of their new Plymouth watch that is due to be launched at this year’s Salon QP.

Here is a rather nice sketch of the first design.

Salon QP already looks like it should be interesting.

News is seeping out on social media of the re-launch of the British watch brand Fears at this autumn’s Salon QP.

Below is the only image of a past Fears watch I can find. A pretty nice looking watch. They might do worse than produce a slightly larger re-interpretation of this.

The only other news I have managed to uncover is the company’s entry on the business social network Linkedin. They say….

“The launch of the Fears Watch Company Limited marks the re-birth of a family-run British watch company. Between 1846 and the 1950s, quality watches coming out of the city of Bristol proudly bore the name FEARS on the dial. Over the past 60 years the company has lain dormant, skipping two generations to be re-founded by the great-great-great-grandson of the founder. Fears will produce and sell high quality wrist watches, manufactured in Switzerland, with comprehensive after-sales care, at an affordable price. A quality wrist watch designed to last a lifetime.”

Definitely something to look forward to at Salon QP. I am wondering how much space there is in this “British/Swiss” niche.